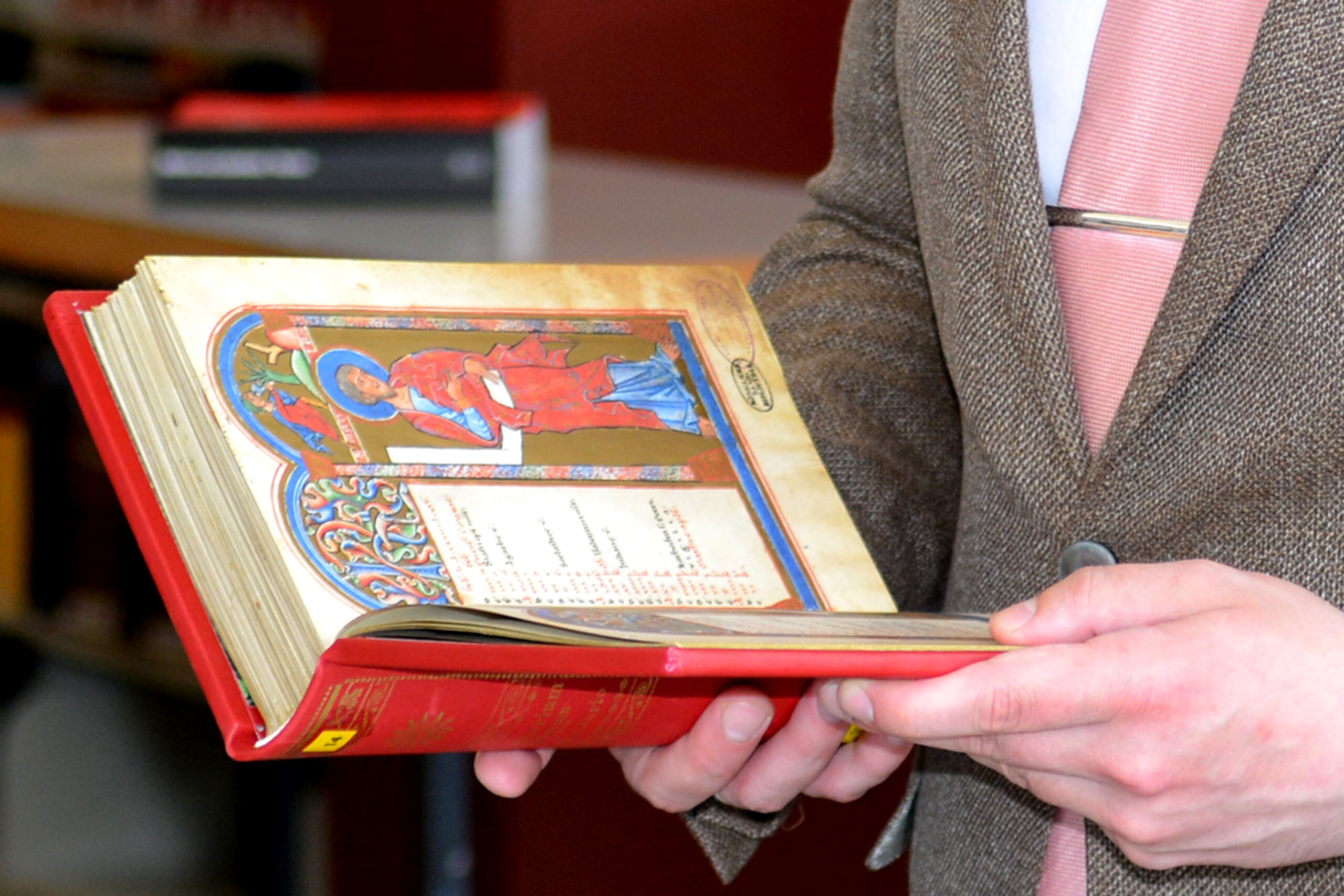 Even though he is the only medievalist in the Faculty of Linguistics and Literary Studies, his researcher’s heart feels at home in Bielefeld. This is because many of his colleagues here are also working on the Middle Ages and the early modern period—albeit from different perspectives. This is precisely why the exchange is so rewarding.

When Maximilian Benz applied for the Heisenberg Programme of the German Research Foundation (DFG), he did not know exactly what to expect. The reason for this is that since January 2018, funding in the humanities has been available for either a scholarship, a position as a research assistant, or indeed for a professorship. Only after acceptance to the programme—for which applicants must already have a post-doctoral lecturing qualification—can they choose between the various academically equivalent options. 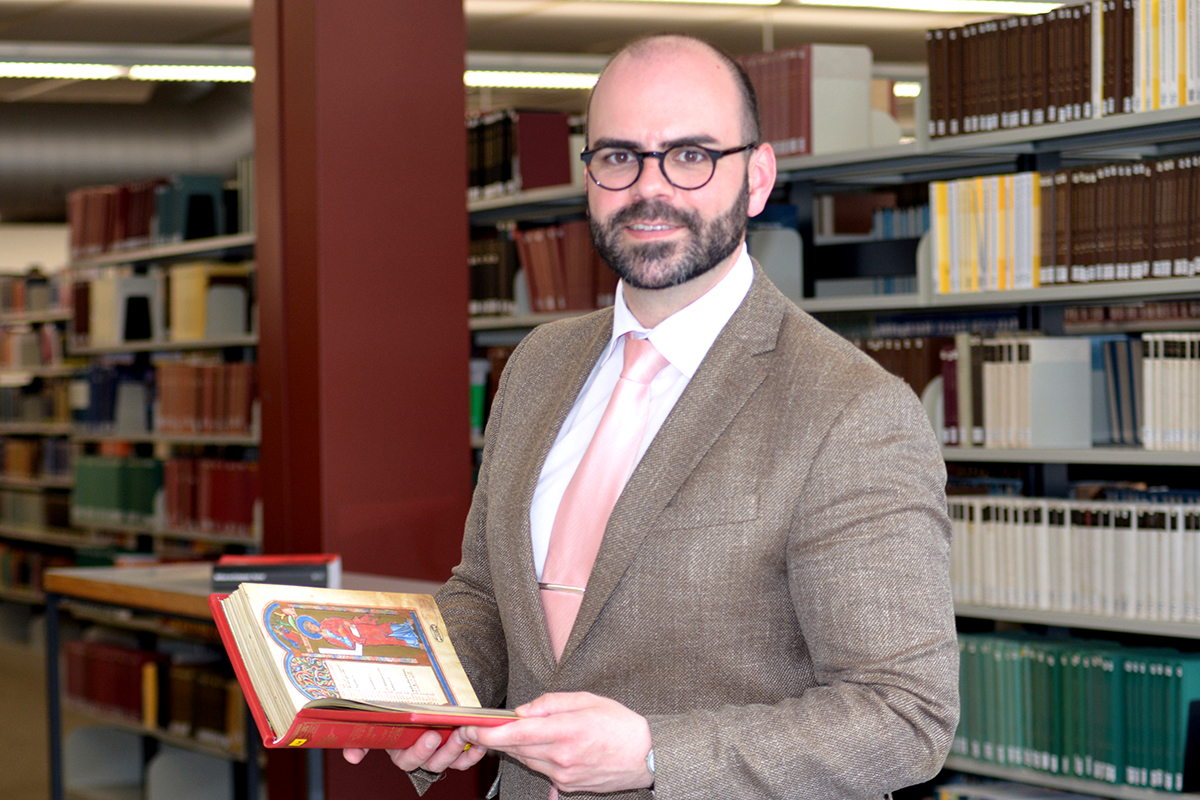 ‘My goal is to revive the Sozialgeschichte of Middle High German literature, a method of correlating medieval society and literature,’ says medievalist Professor Dr Maximilian Benz.

In the meantime, Bielefeld University has appointed him to a professorship, which he says sometimes presents him with challenges: ‘The university has legitimate interests and demands on me as a professor. At the same time, my position is funded by the DFG so that I can fulfil my research assignments. Part of the task is to find a balance between both interests.’

Perhaps this is why the Heisenberg Programme is aimed at young researchers who, with their sometimes still youthful energy and fresh verve, are eager to take on these challenges. However, ‘youthful’ is definitely not the right word to describe his research focus. As a medievalist in Bielefeld’s Faculty of Linguistics and Literary Studies, Professor Dr Maximilian Benz concentrates on works from the Middle Ages and the early modern period. For those to whom names or works do not readily come to mind, we can mention Walther von der Vogelweide for poetry or Wolfram von Eschenbach with his epic poem Parzival.

The German Research Foundation (DFG) initially grants funding of a Heisenberg professorship for 3 years. After two and a half years, an interim evaluation is carried out. If it is positive, the funding is extended to five years. By establishing the post, the university itself undertakes to continue it without further examination as a regular internally funded professorship after the five years have expired. This makes the professorship in the Heisenberg Programme truly exceptional, because the respective university commits itself for a long time.

Shedding light on how social history is portrayed in literature

Generally speaking, according to Benz, medieval literature is ‘heteronomous’ that means that it was written with regard to extra-literary, e.g. religious and political, demands and followed a social role. One of his research areas is derived from this: ‘My goal is to revive the Sozialgeschichte of Middle High German literature, a method of correlating medieval society and literature, as was last attempted in the 1970s and 1980s. As I see it, there is still a lot to be addressed here.’ In the Middle Ages and the early modern period, a differentiated literary system, as we know it today, did not exist. The artistic products of that time were integrated in society very differently in those days. On top of that, there are major problems with sources when reconstructing contexts, which is why the Heisenberg professor regularly looks beyond the boundaries of his own field of research. For example, Benz is a member of the Collaborative Research Centre 1288 ‘Practices of Comparing’. He actively seeks exchange with researchers from other faculties and encounters great interest, for example, from historians and sociologists but also theologians: ‘Religion or religious knowledge is a very important context for this literature.’ 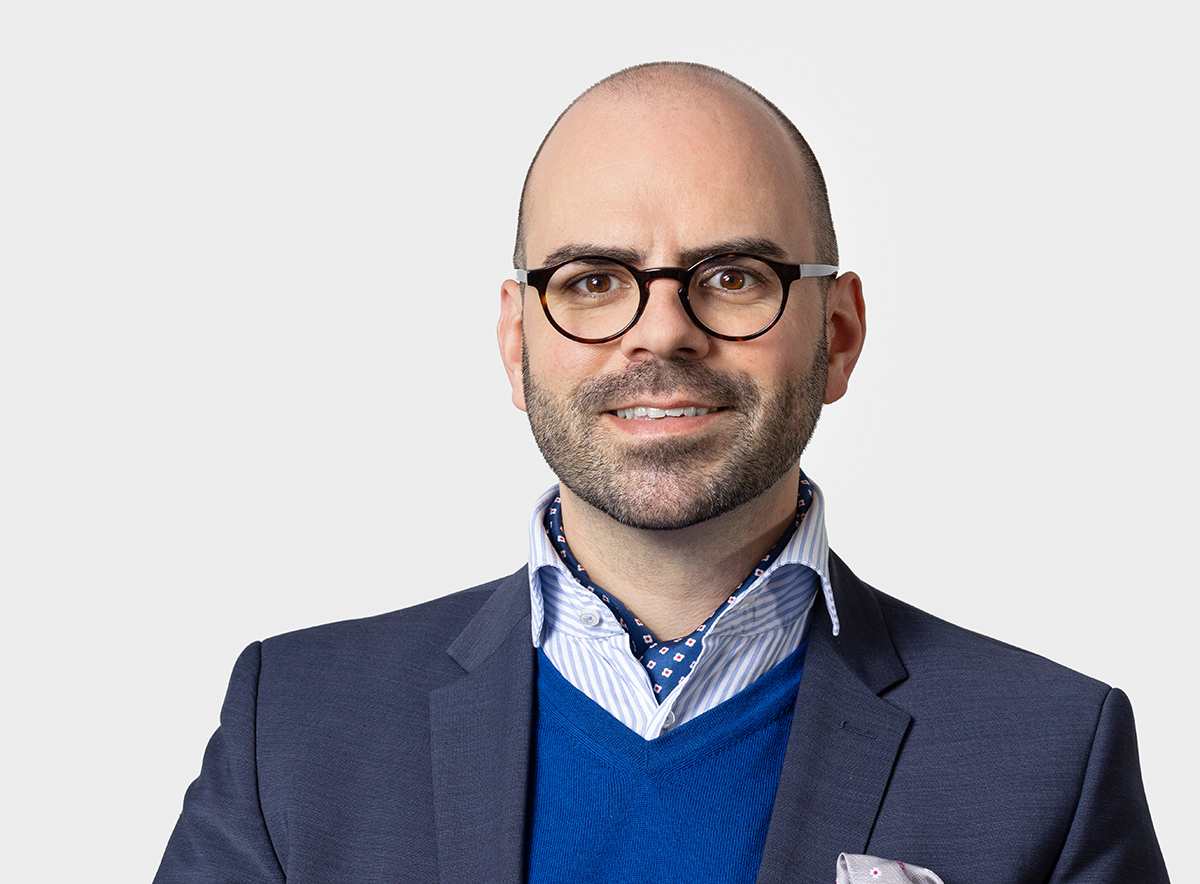 Benz is also exploring the practices of comparing the other and the self as part of his Heisenberg funding. This concerns the question of historical change and the epochal threshold between the late Middle Ages and the early modern period. According to Benz, there is a thread of tradition from the Middle Ages that is not properly appreciated by any of the research fields dealing with this epoch: the Frömmigkeitstheologie [theology of piety]. Benz cites the Christian treatise literature of the late Middle Ages as indicative of the epochal threshold and emphasizes the importance of cooperating with theologians here: ‘Many texts from this era are not studied because they are either not of the highest rank theologically or are not formally aesthetic enough for literary scholars to pounce on them. But what makes them remarkable is that they have been widely handed down and have had a great impact.’ For example, Thomas à Kempis’s treatise The Imitation of Christ is one of the most frequently handed down texts of the Middle Ages that is still adopted today in many free church circles and Catholic reform movements.

Not limited to writings in Middle High German

Incidentally, the term Old German studies that researchers apply to the literature of this period is somewhat misleading. For according to Benz, Old French texts, but also the Latin world, played a major role for novels around the year 1200: ‘The medieval rhetorical arts important for the courtly novels are written in Latin and first have to be made accessible. So it is very useful that I am also well-versed in medieval Latin. Consequently, I would describe my field as medieval comparative studies.’

Up until now, Benz has worked at large universities with major philosophical faculties: Berlin, Munich, and Zurich. ‘I actually came to Bielefeld University as a temporary replacement for my predecessor. The plan was for one year. Something like that is always pure chance, of course, but it meant that I was able to get to know the university inside out and was happy to come back,’ Benz emphasizes. Among the strengths of the university, he names, for example, modern German studies, which enjoys a very good reputation in the German-speaking world, but also the close, cross-faculty cooperation—both factors that offer ideal conditions for his research projects.

When Benz is not poring over old books, apologies, when he is not studying manuscripts written on parchment, he does sport to keep fit—mostly weight training. What fascinates him about it is that he always sees small improvements: ‘A mnemonic from my coach that I like to keep in mind when doing sports but also in my teaching: “Progression before perfection”’.

Maximilian Benz’s field of research shows how fruitful interfaces between different disciplines can be. He says: ‘Research disciplines have developed for good reasons, but there are always fields—in my case texts—that lie between the disciplines. Interdisciplinarity is therefore not an end in itself, but should be used precisely for these specific subject areas.’