How can large amounts of data be transferred or processed as quickly as possible? One key to this could be graphene. The ultra-thin material is only one atomic layer thick, and the electrons it contains have very special properties due to quantum effects. It could therefore be very well suited for use in high-performance electronic components. Up to this point, however, there has been a lack of knowledge about how to suitably control certain properties of graphene. A new study by a team of scientists from Bielefeld and Berlin, together with researchers from other research institutes in Germany and Spain, is changing this. The team’s findings have been published in the journal Science Advances. 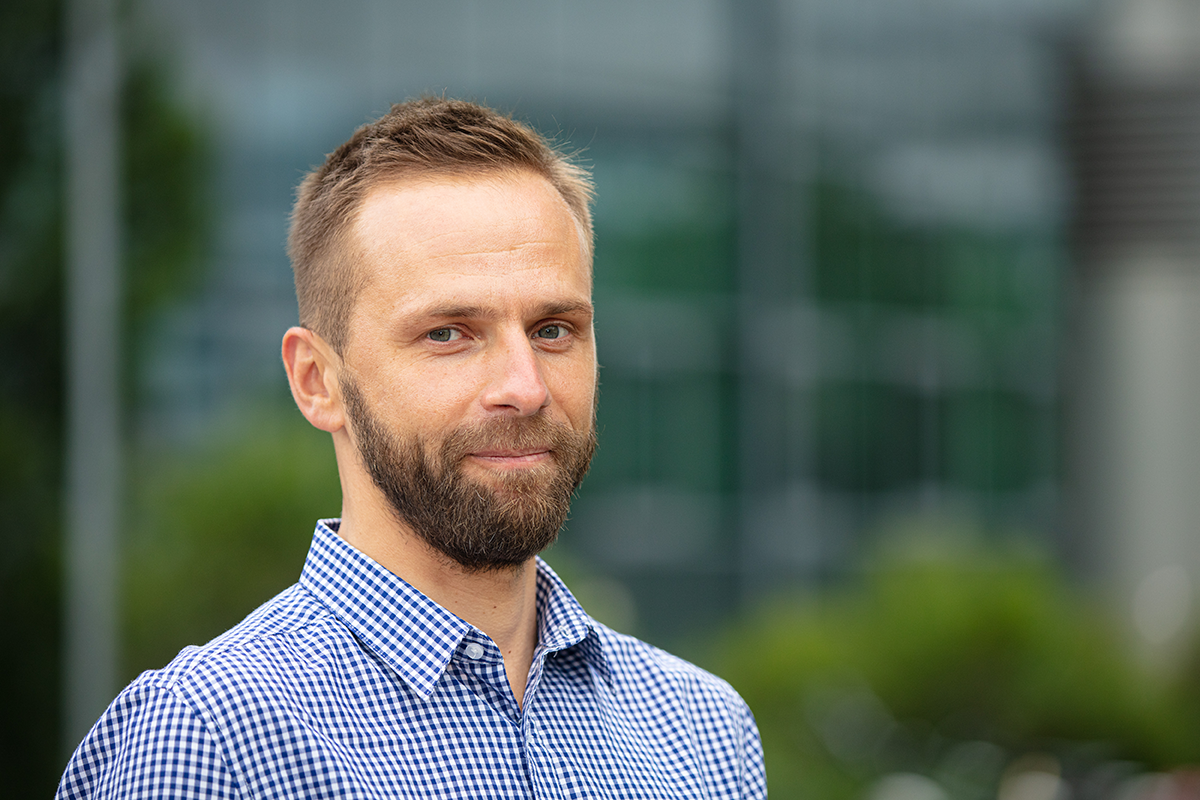 Professor Dr Dmitry Turchinovich of Bielefeld University is one of the two study leads. He investigates how graphene can be used in future electrical engineering applications.

Consisting of carbon atoms, graphene is a material just one atom thick where the atoms are arranged in a hexagonal lattice. This arrangement of atoms is what results in graphene’s unique property: the electrons in this material move as if they did not have mass. This “massless” behavior of electrons leads to very high electrical conductivity in graphene and, importantly, this property is maintained at room temperature and under ambient conditions. Graphene is therefore potentially very interesting for modern electronics applications.

It was recently discovered that the high electronic conductivity and “massless” behavior of its electrons allows graphene to alter the frequency components of electric currents that pass through it. This property is highly dependent on how strong this current is. In modern electronics, such a nonlinearity comprises one of the most basic functionalities for switching and processing of electrical signals. What makes graphene unique is that its nonlinearity is by far the strongest of all electronic materials. Moreover, it works very well for exceptionally high electronic frequencies, extending into the technologically important terahertz (THz) range where most conventional electronic materials fail.

In their new study, the team of researchers from Germany and Spain demonstrated that graphene’s nonlinearity can be very efficiently controlled by applying comparatively modest electrical voltages to the material. For this, the researchers manufactured a device resembling a transistor, where a control voltage could be applied to graphene via a set of electrical contacts. Then, ultrahigh-frequency THz signals were transmitted using the device: the transmission and subsequent transformation of these signals were then analyzed in relation to the voltage applied. The researchers found that graphene becomes almost perfectly transparent at a certain voltage – its normally strong nonlinear response nearly vanishes. By slightly increasing or lowering the voltage from this critical value, graphene can be turned into a strongly nonlinear material, significantly altering the strength and the frequency components of the transmitted and remitted THz electronic signals. 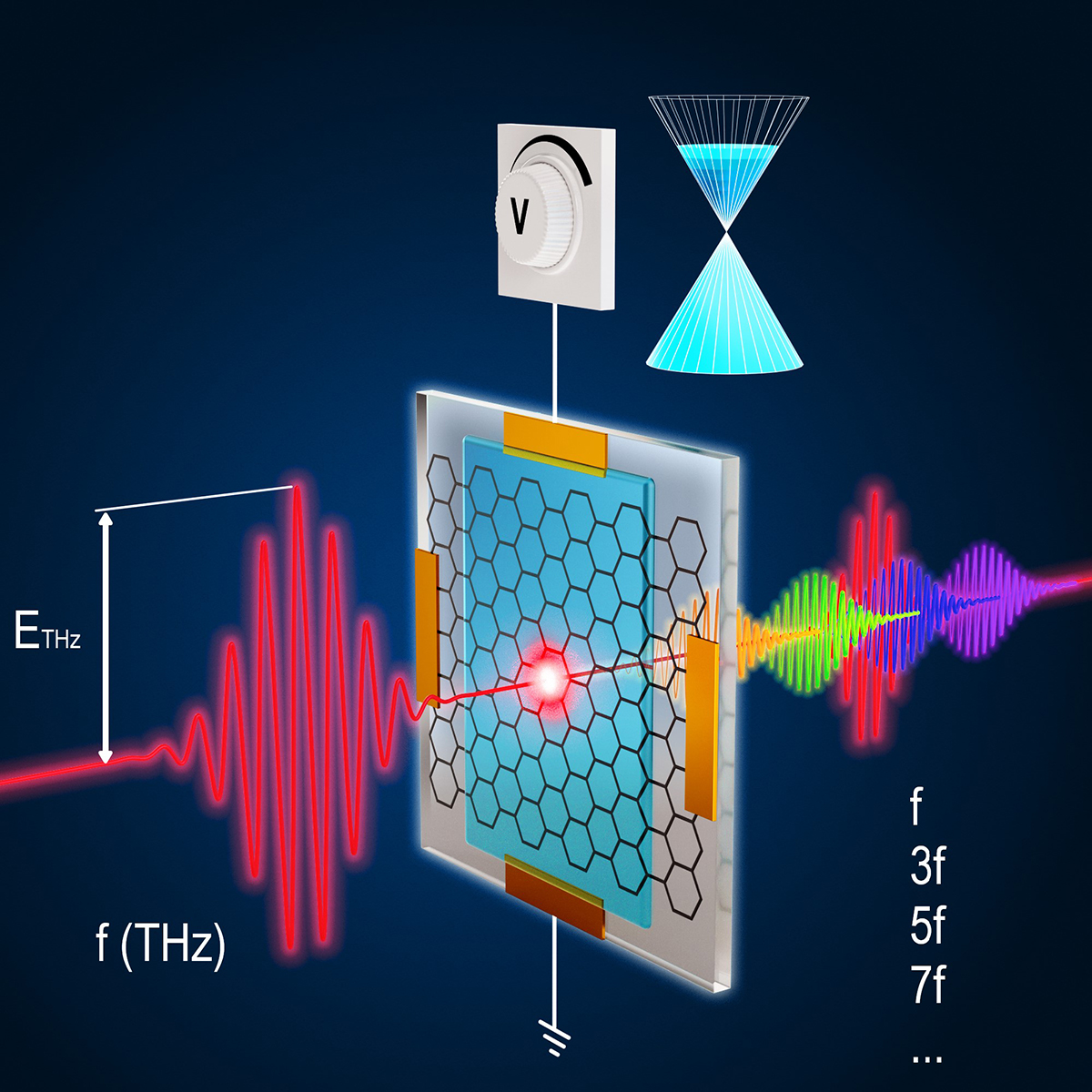 When a control voltage is applied to graphene, the frequency conversion of the current can be controlled.

“This is a significant step forward towards implementation of graphene in electrical signal processing and signal modulation applications,” says Prof. Dmitry Turchinovich, a physicist at Bielefeld University and one of the heads of this study. “Earlier we had already demonstrated that graphene is by far the most nonlinear functional material we know of. We also understand the physics behind nonlinearity, which is now known as thermodynamic picture of ultrafast electron transport in graphene. But until now we did not know how to control this nonlinearity, which was the missing link with respect to using graphene in everyday technologies.”

“By applying the control voltage to graphene, we were able to alter the number of electrons in the material that can move freely when the electrical signal is applied to it,” explains Dr. Hassan A. Hafez, a member of Professor Dr. Turchinovich’s lab in Bielefeld, and one of the lead authors of the study. “On one hand, the more electrons can move in response to the applied electric field, the stronger the currents, which should enhance the nonlinearity. But on the other hand, the more free electrons are available, the stronger the interaction between them is, and this suppresses the nonlinearity. Here we demonstrated – both experimentally and theoretically – that by applying a relatively weak external voltage of only a few volts, the optimal conditions for the strongest THz nonlin-earity in graphene can be created.”

“With this work, we have reached an important milestone on the path towards to using graphene as an extremely efficient nonlinear functional quantum material in devices like THz frequency converters, mixers, and modulators,” says Professor Dr. Michael Gensch from the Institute of Optical Sensor Systems of the German Aerospace Center (DLR) and the Technical University of Berlin, who is the other head of this study. “This is extremely relevant because graphene is perfectly compatible with existing electronic ultrahigh-frequency semiconductor technology such as CMOS or Bi-CMOS. It is therefore now possible to envision hybrid devices in which the initial electric signal is generated at lower frequency using existing semiconductor technology but can then very efficiently be up-converted to much higher THz frequencies in graphene, all in a fully controllable and predictable manner.”

Researchers from Bielefeld University, the Institute of Optical Sensor Systems of the DLR, the Technical University of Berlin, the Helmholtz Center Dresden-Rossendorf, and the Max Planck Institute for Polymer Research in Germany, as well as the Catalan Institute of Nanoscience and Nanotechnology (ICN2) and the Institute of Photonic Sciences (ICFO) in Spain participated in this study. 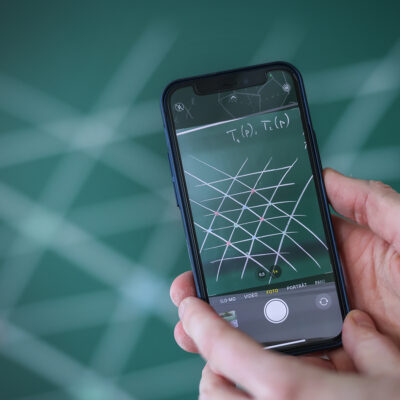