On October 1, 2013, the time has finally come: In an exceptional year, twice as many pupils from schools at NRW complete their Abitur (school leaving examination) and flock to German Universities. A policy to reduce the number of years required to sit the “Abi” in NRW results in the so-called “double-year” where two year-groups sit the same exams.  More than 3,300 young people begin their studies at Bielefeld University in the winter semester, a good 800 more than in the previous year. However, Bielefeld is well prepared for this massive influx – 1,900 additional study places have been made available. 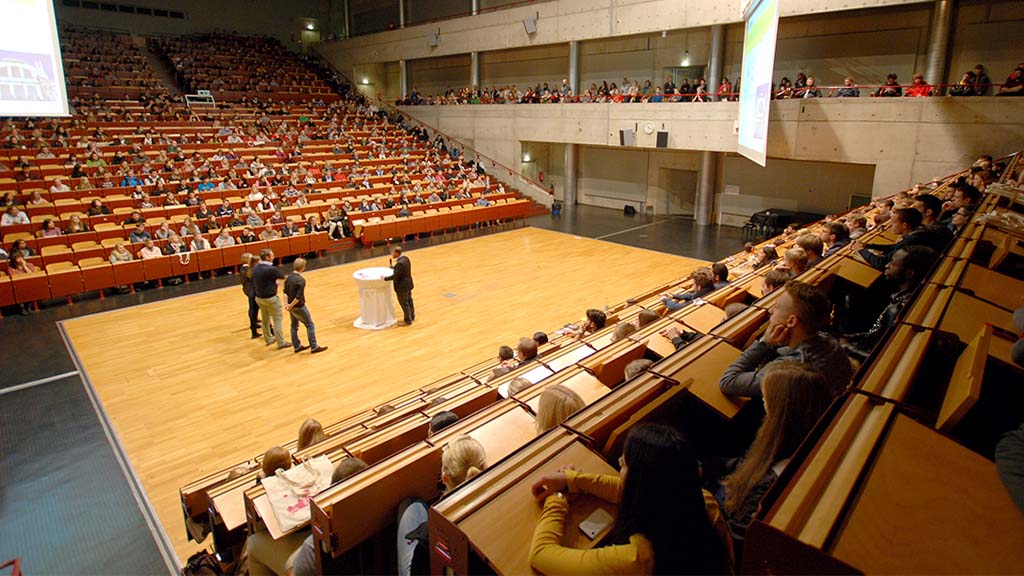 Throughout NRW, around 111,000 “Erstis” (first year students) began their studies, which meant an increase of about ten per cent over the previous year. This figure, however, was lower than feared, as many school leavers deliberately postponed their studies by taking a year out to go abroad or volunteer. At Bielefeld University, the increased numbers of students were accommodated in the lecture theatres and seminar rooms of the new Building X. Some lectures were held in rented film theatres in the city centre. Logo of Bielefeld University for the so-called “doppel-Abi”, when pupils from two year-groups graduated with the Abitur (school leavers examination).
–
Source: Universität Bielefeld

Development of student numbers
Plans for the “reform university” at Bielefeld originally had 3,000 students in mind.  However, between 1970 and 1973 the target figures for student places in the Federal Republic of Germany had doubled, with Bielefeld University being asked to step in to relieve the pressure by accepting over 10,000 of these students. The situation in Bielefeld was exacerbated by the integration of the Pädagogische Hochschule (teacher training college) in 1980 when the number of students rose to over 10,000 for the first time. The number of professors, however, was not increased, and some positions were even cut. The idea to privilege Bielefeld as a “research university” met with unfavourable political stipulations and the opposition of other universities. Meanwhile, the number of students climbed to over 24,000. Despite this, Bielefeld University has retained its appetite for reform and its ability to implement it since its founding.